Features and advantages of flexible silicon nanowires for SERS applications

The paper reports on the features and advantages of horizontally oriented flexible silicon nanowires (SiNWs) substrates for surface-enhanced Raman spectroscopy (SERS) applications. The novel SERS substrates are described in detail considering three main aspects. First, the key synthesis parameters for the flexible nanostructure SERS substrates were optimized. It is shown that fabrication temperature and metal-plating duration significantly influence the flexibility of the SiNWs and, consequently, determine the SERS enhancement. Second, it is demonstrated how the immersion in a liquid followed by drying results in the formation of SiNWs bundles influencing the surface morphology. The morphology changes were described by fractal dimension and lacunar analyses and correlated with the duration of Ag plating and SERS measurements. SERS examination showed the optimal intensity values for SiNWs thickness values of 60–100 nm. That is, when the flexibility of the self-assembly SiNWs allowed hot spots occurrence. Finally, the test with 4-mercaptophenylboronic acid showed excellent SERS performance of the flexible, horizontally oriented SiNWs in comparison with several other commercially available substrates. 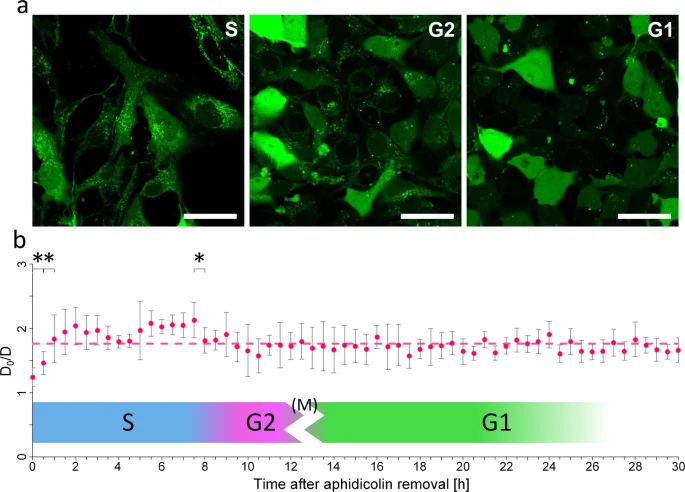 Nanoviscosity of the cytoplasm is a key factor affecting diffusion of biomolecules and – as a consequence – rates of biochemical reactions in a cell. Nanoviscosity is an outcome of variable chemical and structural factors, which can temporarily change with cell-cycle associated changes of intracellular architecture. Thus, the question arises, whether rates of biochemical reactions depend on the point of cell cycle. In this paper we address this topic by constant observation of nanoviscosity of HeLa cells cytoplasm during S, G2 and G1 phases after Aphidicolin synchronization. For this purpose we measured diffusion rates of EGFP molecules using fluorescence correlation spectroscopy (FCS). To our surprise, a counter-intuitive stability of cytoplasmic viscosity was observed during the cell cycle. Our results hint at possible existence of robust mechanism maintaining stable physiological viscosity of the cytoplasm, despite huge structural changes during cell cycle.

Microfluidic devices have revolutionized biological assays, but complex set-ups are required to prevent the unwanted mixing of reagents in the liquid samples being analysed. A simpler solution has just been found. 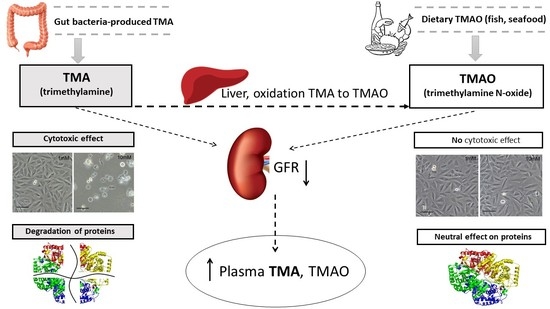 TMA, A Forgotten Uremic Toxin, but Not TMAO, Is Involved in Cardiovascular Pathology

Trimethylamine-N-oxide (TMAO) has been suggested as a marker and mediator of cardiovascular diseases. However, data are contradictory, and the mechanisms are obscure. Strikingly, the role of the TMAO precursor trimethylamine (TMA) has not drawn attention in cardiovascular studies even though toxic effects of TMA were proposed several decades ago. We assessed plasma TMA and TMAO levels in healthy humans (HH) and cardiovascular patients qualified for aortic valve replacement (CP). The cytotoxicity of TMA and TMAO in rat cardiomyocytes was evaluated using an MTT test. The effects of TMA and TMAO on albumin and lactate dehydrogenase (LDH) were assessed using fluorescence correlation spectroscopy. In comparison to HH, CP had a two-fold higher plasma TMA (p < 0.001) and a trend towards higher plasma TMAO (p = 0.07). In CP plasma, TMA was inversely correlated with an estimated glomerular filtration rate (eGFR, p = 0.002). TMA but not TMAO reduced cardiomyocytes viability. Incubation with TMA but not TMAO resulted in the degradation of the protein structure of LDH and albumin. In conclusion, CP show increased plasma TMA, which is inversely correlated with eGFR. TMA but not TMAO exerts negative effects on cardiomyocytes, likely due to its disturbing effect on proteins. Therefore, TMA but not TMAO may be a toxin and a marker of cardiovascular risk. 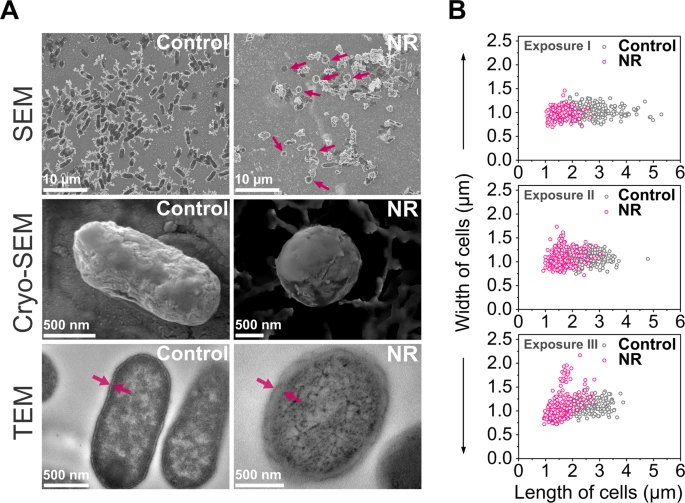 Evolution of bacteria to selective chemical pressure (e.g. antibiotics) is well studied in contrast to the influence of physical stressors. Here we show that instantaneous physical stress in a homogeneous environment (without concentration gradient) induces fast adaptation of Escherichia coli. We exposed E. coli to a large number of collisions of around 105 per bacterium per second with sharp ZnO nanorods. The pressure exerted on the bacterial cell wall was up to 10 GPa and induced phenotype changes. The bacteria’s shape became more spherical, the density of their periplasm increased by around 15% and the average thickness of the cell wall by 30%. Such E. coli cells appeared almost as Gram-positive bacteria in the standard Gram staining. Additionally, we observed a combination of changes occurring at the genomic level (mutations identified in form of single nucleotide polymorphisms) and down-regulation of expression of 61 genes encoding proteins involved in β-oxidation of fatty acids, glycolysis, the citric acid cycle, as well as uptake of amino acids and enzyme cofactors. Thus, we show that bacteria undergo phenotypic changes upon instantaneous, acute physical stress without any obviously available time for gradual adaptation. 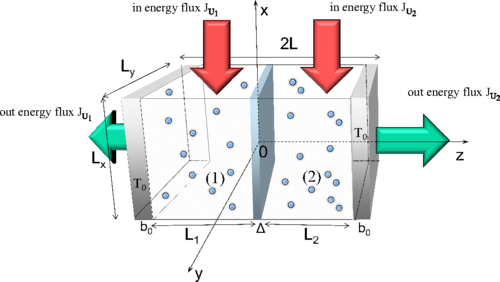 Flux and storage of energy in nonequilibrium stationary states

Systems kept out of equilibrium in stationary states by an external source of energy store an energy ΔU=U−U0. U0 is the internal energy at equilibrium state, obtained after the shutdown of energy input. We determine ΔU for two model systems: ideal gas and a Lennard-Jones fluid. ΔU depends not only on the total energy flux, JU, but also on the mode of energy transfer into the system. We use three different modes of energy transfer where the energy flux per unit volume is (i) constant, (ii) proportional to the local temperature, and (iii) proportional to the local density. We show that ΔU/JU=τ is minimized in the stationary states formed in these systems, irrespective of the mode of energy transfer. τ is the characteristic timescale of energy outflow from the system immediately after the shutdown of energy flux. We prove that τ is minimized in stable states of the Rayleigh-Benard cell. 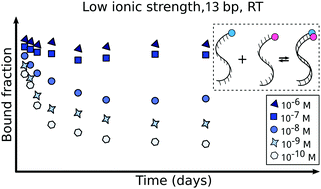 Kinetics and equilibrium constants of oligonucleotides at low concentrations. Hybridization and melting study.

Although DNA hybridization/melting is one of the most important biochemical reactions, the non-trivial kinetics of the process is not yet fully understood. In this work, we use Förster resonance energy transfer (FRET) to investigate the influence of temperature, ionic strength, and oligonucleotide length on the kinetic and equilibrium constants of DNA oligonucleotide binding and dissociation. We show that at low reagent concentrations and ionic strength, the time needed to establish equilibrium between single and double strand forms may be of the order of days, even for simple oligonucleotides of a length of 20 base pairs or less. We also identify and discuss the possible artifacts related to fluorescence-based experiments conducted in extremely dilute solutions. The results should prove useful for the judicious design of technologies based on DNA-matching, including sensors, DNA multiplication, sequencing, and gene manipulation. 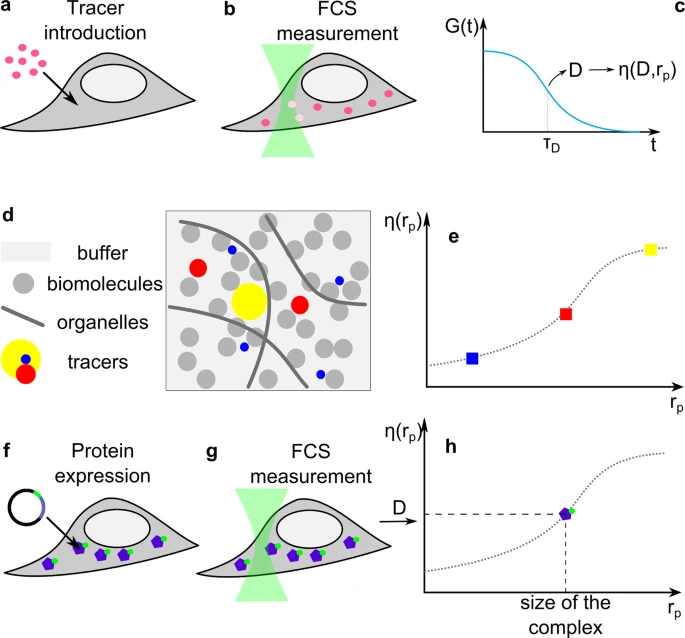 Biochemistry in living cells is an emerging field of science. Current quantitative bioassays are performed ex vivo, thus equilibrium constants and reaction rates of reactions occurring in human cells are still unknown. To address this issue, we present a non-invasive method to quantitatively characterize interactions (equilibrium constants, KD) directly within the cytosol of living cells. We reveal that cytosolic hydrodynamic drag depends exponentially on a probe’s size, and provide a model for its determination for different protein sizes (1–70 nm). We analysed oligomerization of dynamin-related protein 1 (Drp1, wild type and mutants: K668E, G363D, C505A) in HeLa cells. We detected the coexistence of wt-Drp1 dimers and tetramers in cytosol, and determined that KD for tetramers was 0.7 ± 0.5 μM. Drp1 kinetics was modelled by independent simulations, giving computational results which matched experimental data. This robust method can be applied to in vivo determination of KD for other protein-protein complexes, or drug-target interactions.

Quantitative description of the interaction between doxorubicin (DOX), a broadly used anticancer drug, and DNA is the key to understand the action mechanism and side effects of its clinical use. However, the reported equilibrium constants of DOX–DNA interaction obtained using a range of different analytical methods vary even by several orders of magnitude. Herein, we propose a novel application of a single-molecule technique – fluorescence correlation spectroscopy (FCS) – to probe the interaction between DOX and two types of DNA (pUC19 and calf thymus DNA), taking advantage of intrinsic self-fluorescence of DOX. We provide an analytical formula for autocorrelation analysis to determine the equilibrium constant of DOX–DNA complex-formation, where binding of multiple DOX molecules to a DNA chain is included in the reaction–diffusion model. Our FCS-based method not only quantitatively revealed the values of equilibrium constant, but also implied that the stability of DOX–DNA complex is related to the types of base pair rather than the length or structure of the DNA. This work opens a promising pathway toward quantitative determination of molecular interactions in complex systems such as living cells or organisms at single-molecule level. 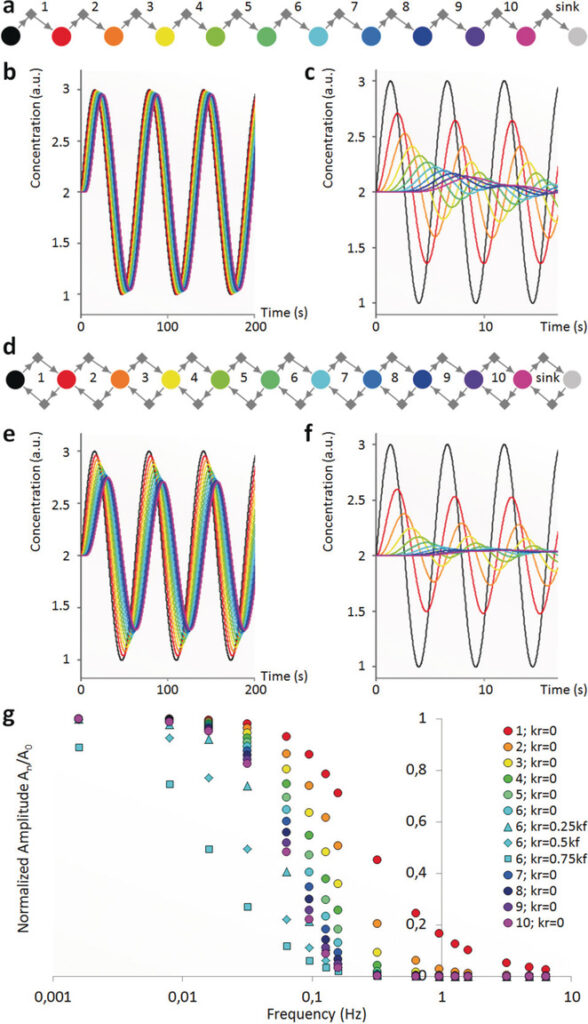 Akin to electronic systems that can tune to and process signals of select frequencies, systems/networks of chemical reactions also “propagate” time‐varying concentration inputs in a frequency‐dependent manner. Whereas signals of low frequencies are transmitted, higher frequency inputs are dampened and converted into steady‐concentration outputs. Such behavior is observed in both idealized reaction chains as well as realistic signaling cascades, in the latter case explaining the experimentally observed responses of such cascades to input calcium oscillations. These and other results are supported by numerical simulations within the freely available Kinetix web application we developed to study chemical systems of arbitrary architectures, reaction kinetics, and boundary conditions.