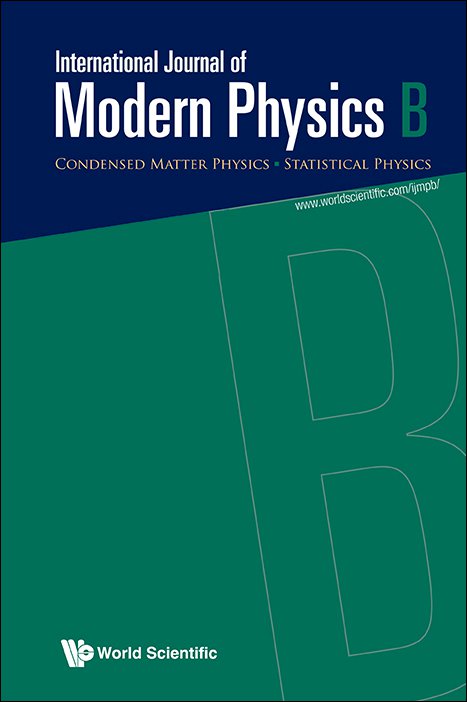 Dislocations in soft condensed matter systems such as lamellar systems of polymers, liquid crystals and ternary mixtures of oil, water and surfactant (amphiphilic systems) are described in the framework of continuum elastic theory. These systems are the subject of studies of physics, chemistry and biology. They also find applications in industry. Here we will discuss in detail the influence of dislocations on the bulk and surface properties of these lamellar phases. Especially the latter properties have only been recently studied in detail. We will present the experimental evidence of the existence of screw and edge dislocations in the systems and study their static properties such as: energy, line tension and core structure. Next we will show how the surface influences the equilibrium position of dislocations in the system. We will give the theoretical predictions and present the experimental results on thin copolymer films, free standing films of liquid crystals and smectic droplets shapes. In semi-infinite lamellar systems characterized by small surface tension the dislocation is stabilized at a finite distance, heq, from the surface, due to the surface bending elastic constant, Ks (for zero surface tension heq≈Ks/2K, where K is the bulk bending elastic constant). For large surface tension the edge dislocations are strongly repelled by the surface and the equilibrium location for finite symmetric systems such as free standing liquid crystal films shifts towards the center of the system. The surface is deformed by dislocations. These deformations are known as edge profiles. They will be discussed for finite systems with small and large surface tension. Surface deformations induce elastic interactions between edge dislocations, which decay exponentially with distance with decay length proportional to

where D is the size of the system normal to lamellas. Two screw dislocations in finite system interact with the logarithmic potential, which is proportional to the surface tension and inversly proportional to D. The surface induced elastic interactions will be compared to, well-known, bulk deformation induced interactions. A new phenonenon discussed in our paper is the fluctuations induced interactions between edge dislocations, which follows from the Helfrich mechanism for flexible objects. At suitable conditions, edge dislocations can undergo an unbinding transition. Also a single dislocation loop can undergo an unbinding transition. We will calculate the properties of the loop inside finite system and discuss in particular the unbinding transition in freely suspended smectic films. We shall also compute the equilibrium size of the loop contained between two hard walls. Finally we will discuss the dynamical bulk properties of dislocations such as: mobility (climb and glide), permeation, and helical instability of screw dislocations. Lubrication theory will also be discussed. 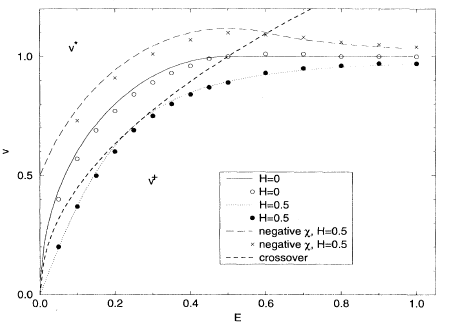 We discuss the front propagation in ferroelectric chiral smectic liquid crystals (Sm-C*) subjected to electric and magnetic fields that are applied parallel to smectic layers. The reversal of the electric field induces the motion of domain walls or fronts that propagate into either an unstable or metastable state. In both regimes, the front velocity is calculted exactly. Depending on the field, the speed of a front propagating into the unstable state is given either by the so-called linear marginal-stability velocity or by the nonlinear marginal-stability expression. The crossover between these two regimes can be tuned by a magnetic field. The influence of initial conditions on the velocity selection problem can also be studied in such experiments. Sm-C* therefore offers a unique opportunity to study different aspects of front propagation in an experimental system. 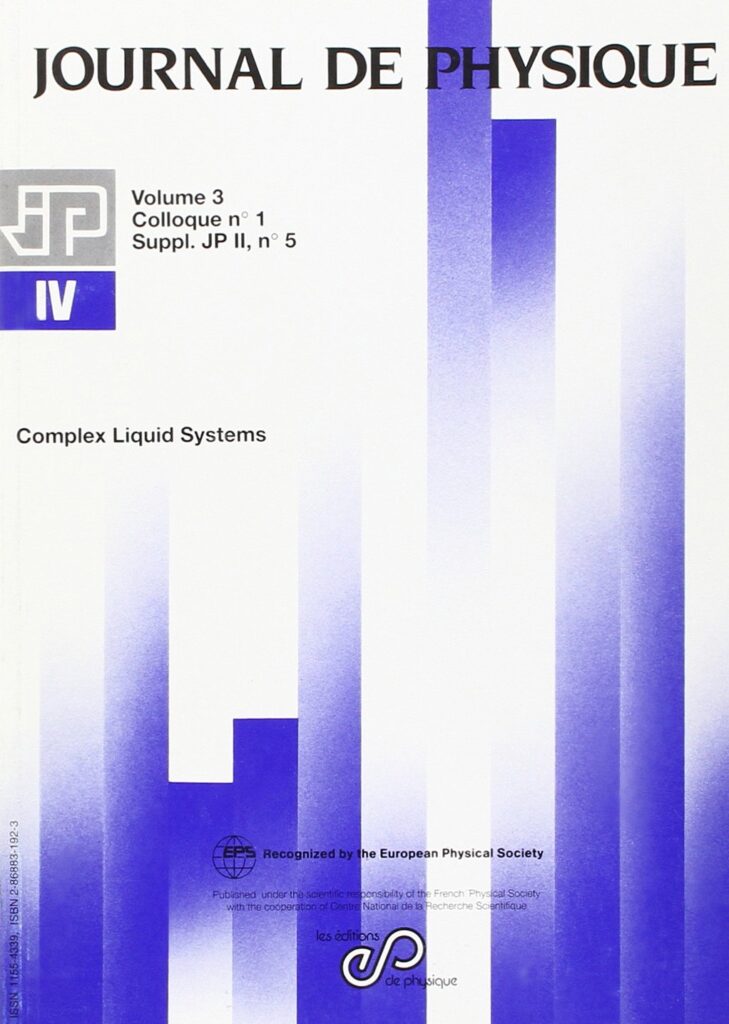 Influence of the Electric Field on Edge Dislocations in Smectics

, can shift them towards the surface. This critical field (in Gauss cgs units) is given by the following approximate formula

. Here, B and K are smectic elastic constants,

is the surface tension, N is the number of smectic layers and

is the dielectric anisotropy. The constant

. Additionally, we assumed that

, where d is the smectic period. This formula is valid for

and N>12. For smaller values of the surface tension and large N the linear relation between

breaks down, since eventually for

approaches 0. The equilibrium location of a dislocation in the smectic film,

and G(x) is a function independent of the film thickness (for N>12) and of the value of the surface tension.

2D Brownian motion in a system of reflecting barriers: effective diffusivity by a sampling method

We study two-dimensional Brownian motion in an ordered periodic system of linear reflecting barriers using the sampling method and conformal transformations. We calculate the effective diffusivity for the Brownian particle. When the periods are fixed but the length of the barrier goes to zero, the effective diffusivity in the direction perpendicular to the barriers differs from the standard one by a term of order epsilon 2 where epsilon is the length of a barrier. 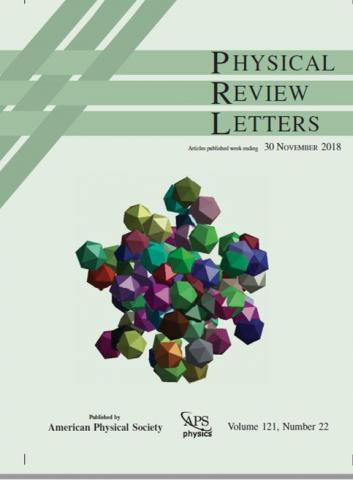 Determination of the mean-field stability temperature in polymer blends 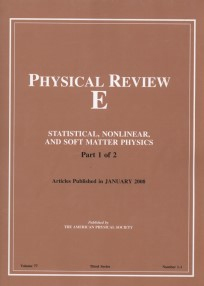 A continuum theory of dislocations is applied to three different problems: edge profiles in thin diblock copolymer films deposited on a solid substrate, equilibrium location of the edge dislocation in lamellar systems near free surfaces, and nematic-smectic phase transition in thin freely suspended liquid crystal films. Because of the surface tension the edge profile at the air/diblock copolymer surface in thin films is very broad. In semi-infinite lamellar systems with small surface tension the dislocation is stabilized at a finite distance from the surface. In smectic films of thickness D the temperature of the unbinding transition for dislocation loops, TN−A(D), is proportional to 1/ √D .

We derive the equation for the single-chain correlation function in polymer blends. The chains in the incompressible blend have a radius of gyration smaller than the radius of gyration for ideal chains. The chains shrink progressively as we approach the critical temperature Tc. The correction responsible for shrinking is proportional to 1/ √N , where N is the polymerization index. At T=Tc and for N=1000, the size of the chain has been estimated to be 10% smaller than the size of the ideal coil. The estimate relies on the appropriate cutoff. In the limit of N→∞ the chains approach the random walk limit. Additionally, we propose in this paper a self-consistent determination of the radius of gyration and the upper wave-vector cutoff. Our model is free from any divergences such as were encountered in the previous mean-field studies; we make an estimate of the chain size at the true critical temperature and not the mean-field one. 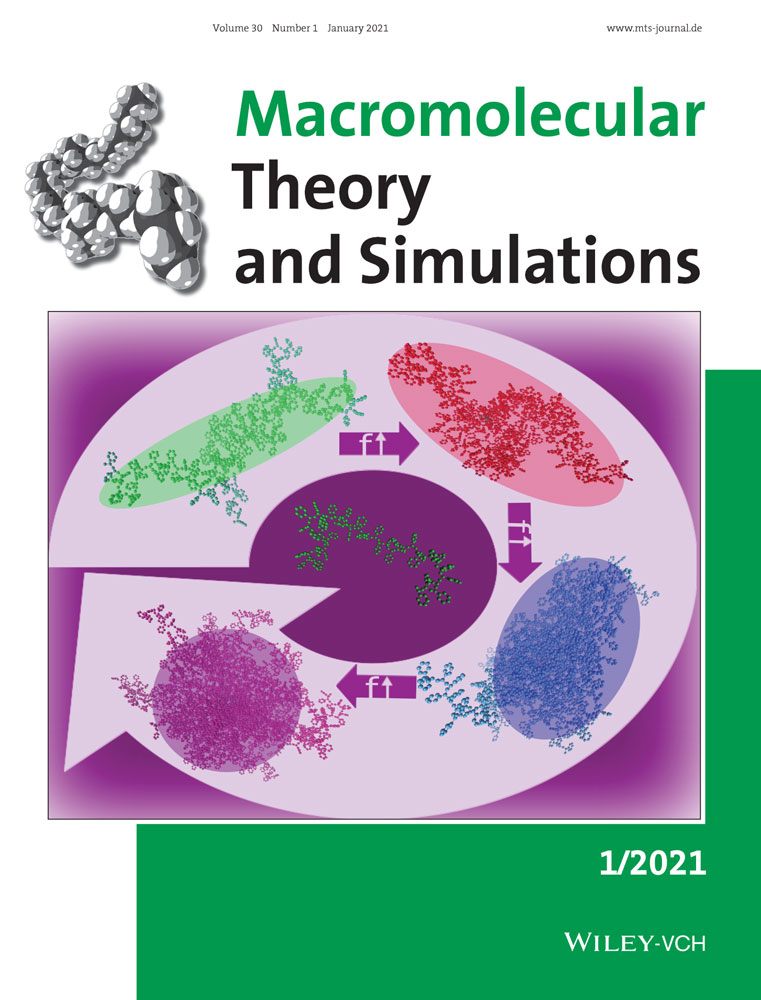 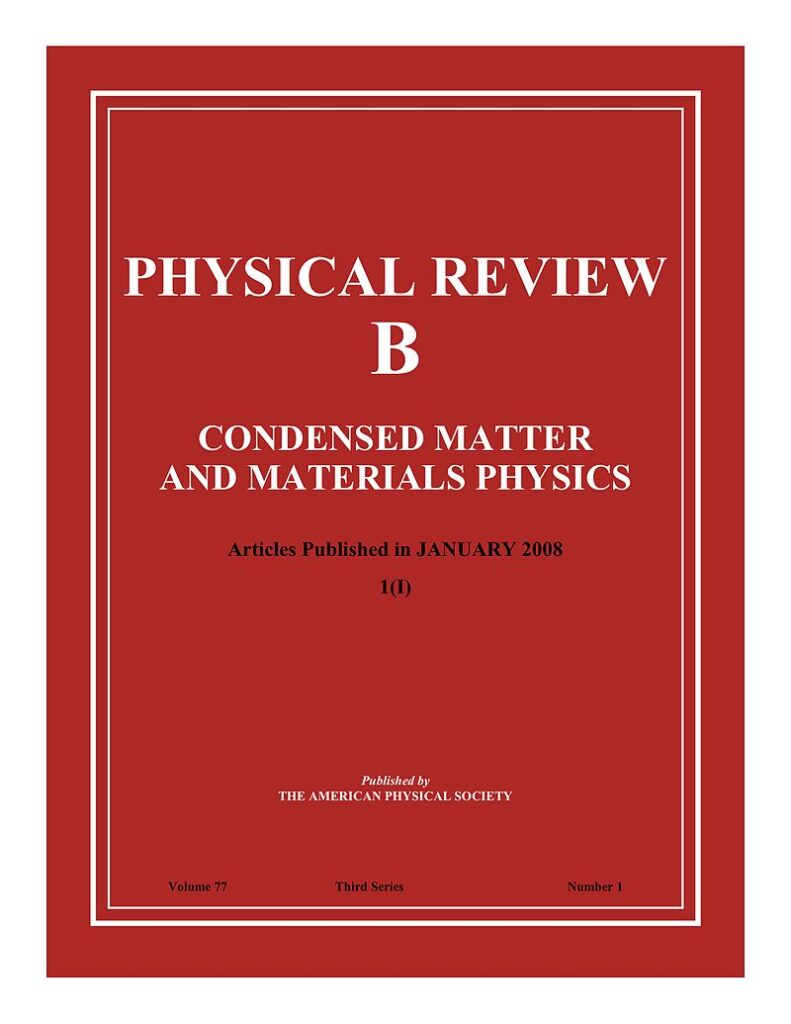 The distortions induced by dislocation loops are studied in finite systems. The influence of finite size, D, of the system, surface tension, and surface-bending elastic constant on the nematic-smectic (NA) phase transition is discussed. In thin freely suspended smectic liquid-crystal films the nematic-smectic transition temperature, TNA(D), is proportional to 1/ √D , providing the transition is initiated by the unbinding of the dislocation loops. The smectic phase is stabilized in films, i.e., TNA(D)>TNA(∞). The loop-unbinding mechanism for the NA transition is completely suppressed in films sandwiched between solid boundaries, because the distortion energy in this case is proportional to the area of the loop, while the loop configurational entropy is proportional to its length. For temperatures T≥TNA(∞) the equilibrium size of the loop, Req, is proportional to the distance between solid boundaries, D. It could grow to infinity only for D→∞ and T≥TNA(∞). On the elastic free energy for smectic-A liquid crystals

We thoroughly discuss the layer deformations in smectic-A liquid crystals. The invariant elastic free energy is presented in terms of the derivatives of the vector field normal to layers and the change of the distance between the layers. We compare our results with the previous works of de Gennes and of Grinstein and Pelcovits. It is pointed out that anharmonic terms in the elastic free energy might be responsible for the change of the average layer spacing, layer spacing profile and in particular for the tilt profiles in finite smectic systems. 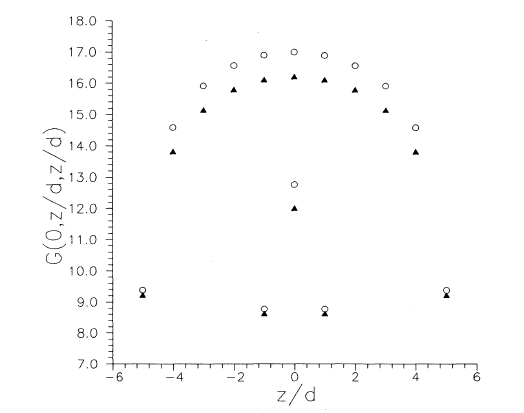 The correlation function for the layer displacement in a finite smectic system is calculated using the continuous model. The results are compared with the predictions of the discrete model of layer fluctuations and a difference of only a few percent is found. Additionally, the fluctuation-induced deformations of the smectic film are discussed. The fluctuations increase the average layer spacing by about 3%. Consequently, the areal density in the smectic layer and also the temperature of the Kosterlitz-Thouless phase transition decrease. 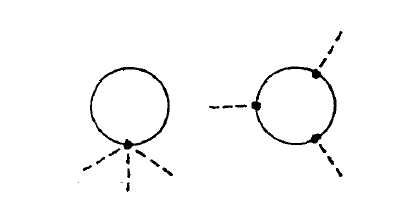 Critical temperature and concentration versus molecular weight in polymer blends: Conformations, fluctuations, and the Ginzburg criterion

We use the field‐theoretical methods to derive the self‐consistent one‐loop equations (Hartree approximation) for the location of the critical point in binary mixtures of polymers. The small parameter in the loop expansion is the inverse of the square root of the number of segments (monomers) in a polymer chain 1/√N. Both the ideal chain conformation and fluctuation corrections to the Flory–Huggins mean field result are taken into account. For symmetric mixtures, the critical temperature Tc is shown to deviate from its mean field value (∼N) as √N, while the critical concentration remains unchanged in comparison to its mean field value φ̄c=1/2. Since the fluctuations tend to disorder the system, the real value of the critical temperature is lower than its mean field value. For asymmetric A,B mixture (NA≳NB), the critical concentration of A monomers φ̄c is shown to be larger than its mean field value. In the limit of NA→∞, the critical temperature attains its mean field value, even for finite NB. However, we estimate that for NA=NB∼104, the correction to the Flory–Huggins parameter at the critical point may still be of the order of 10%, although it depends on the details of the system. The explicit formulas for Tc and φ̄c as functions of NA and NB are given. The role of the upper wave vector cutoff in these formulas is emphasized and its proper estimate is given. The loop expansion, viewed as an expansion in a small parameter, is correct as long as both NA and NB are much larger than unity and breaks down when any of these quantities becomes of the order of unity. The calculation of the Ginzburg region in the temperature‐concentration plane is also given. It is based on the analysis of the scattering intensity. The comparison with the earlier estimates of the Ginzburg criterion (for temperature) is made.

We study density–density, nematic–nematic, and density–nematic order‐parameter correlation functions in an incompressible system of rigid–flexible diblock copolymers. Rigid parts are modeled as rods of zero thickness, and flexible parts as chains with freely rotating bonds. The Hamiltonian contains interactions of the isotropic Flory–Huggins and anisotropic Maier–Saupe forms. Correlation functions are calculated in the Gaussian approximation, and are found to oscillate with a characteristic period equal to the length of the rigid part. They also show that lamellar domain boundaries of systems with longer rods are sharper than those with shorter ones, and that the linear density measured along any direction is anticorrelated with the order parameter measuring nematic order in that direction. This latter effect is due to the isotropy of the system, and is relatively independent of the Maier–Saupe and Flory–Huggins parameters. We also study the stability of the system against nematic and lamellar perturbations, and show how the general features of the phase diagram change with the Maier–Saupe parameter. 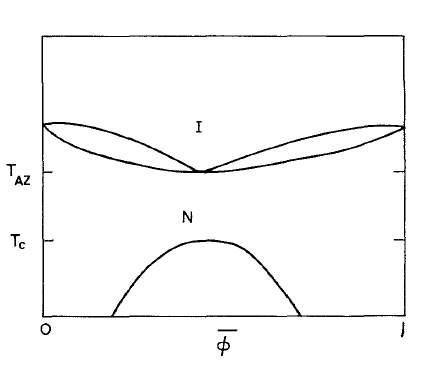 We consider three systems containing rigid and/or flexible main‐chain nematogenic polymers: mixtures of a rigid and a flexible polymer, mixtures of two different rigid polymers, and a system of diblocks of rigid and flexible pieces. The flexible components are modeled as chains with freely rotating bonds, while the rigid components are modeled as rods of negligible thickness. The Landau–de Gennes expansion of the free energy is derived, and the form of the phase diagrams is examined. Conditions for the existence of generic diagrams is given in terms of the Flory–Huggins and Maier–Saupe interaction parameters. The location of the azeotrope in the rigid–rigid mixture is calculated analytically. The nematic–isotropic phase transition in the rigid–flexible diblock (in general, n‐block) copolymer system is also studied. In particular, the change in the transition temperature with the number of monomers in a rigid block is determined.